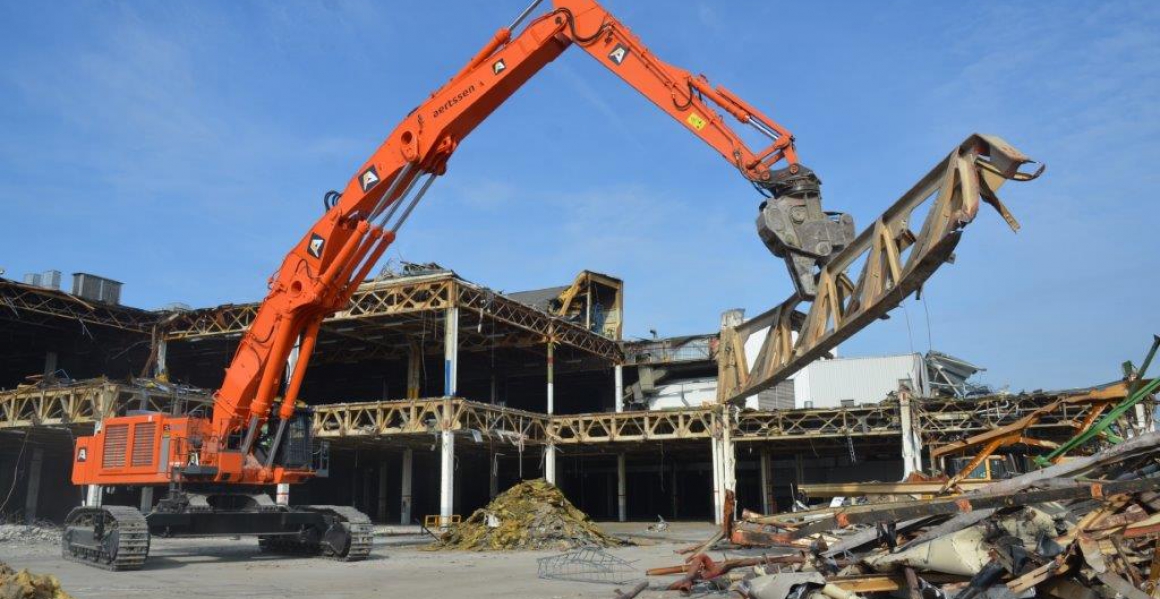 Aertssen has taken delivery of another extreme version of Hitachi's EX1200 called the Grizzly 2.0. The big Hitachi was primarly designed to lift and place 10t rock armour blocks 27m from the centre to its slew ring.

Size matters in international port development projects, especially as such works increasingly call for heavier blocks and rock armour to be placed at greater distances from any hard standing.

The Belgium-based Aertssen Group is one of a handful of global specialists in this area and over the years has commissioned a large number of specialist machines to undertake this challenging work.

The firm’s massive 1750-strong machinery fleet includes no fewer than 39 Hitachi excavators heavier than 80 tonnes, including 19 EX1200s and a couple of EX1900s.

All were supplied and reworked by the well-known Belgian dealer Luyckx. As we go to press, Aertssen has just ordered another 10 excavators including a 29m-reach EX1200-6 and a pair of 21m ZX870s.

Nine of Aertssen’s EX1200s are fitted with 15m booms and 12.3m sticks, providing a total reach of 29m from the centre of the slew ring.

Last year we reported on another EX1200 to enter the fleet, a Dash 6 model reworked by Luyckx with a TAB (triple articulated boom) front end for block placement duty. While the three-piece front end is heavier than a traditional boom and stick, a TAB provides increased flexibility from an enlarged working envelope.

By the time it was finished, the weight of the excavator had risen from 112 tonnes to a massive 170 tonnes. It was capable of lifting a 10t block at 27m reach and could submerge a bucket to depths of 15m.

Affectionately referred to as The Grizzly, this massive excavator was shipped to a port expansion job in Costa Rica where it still works today.

Luyckx went on to make a second set of identical TAB working equipment for another EX1200, destined for a project in Israel. We managed to check out the third TAB excavator in this series, as it was being tested out at a dry-land site in Belgium, prior to being shipped to a port on the other side of the world.

The project to demolish part of the former Ford car factory at Genk was a challenging one, covering a total area of over 50 hectares.

Aertssen teamed up with fellow Belgian company Aclagro to tackle the fi rst and largest part of the sprawling complex, known as the C-hall. This main 70m-long x 300m-wide building was used to make the Ford Mondeo and S-Max, and was the fi rst to come down.

In total, it is estimated that the demolition of the former factory will generate 50,000 tonnes of steel and 50,000 cubic metres of concrete.

The two partners have until June 2018 to clear the site, which we understand will be redeveloped as a logistics centre. However, by that time the big Hitachi will be at its new home, lifting and placing large blocks in another port development project.

Transported on seven trucks, the 170-tonne EX1200-6 TAB is the largest of 20 excavators working on site. These include a 28m Cat 345D HRD that is Aertssen’s highest-reaching demo rig and a familiar Liebherr R974 (see panel).

At the time of our visit the EX1200 was unceremoniously ripping large chunks of steel from one end of the former production hall. The engine note sounds familiar, as it is the standard six-pot 760hp Cummins QSK23-C driving standard hydraulic pumps. Physically though, the excavator looks a lot different from when it left the factory, due mainly to the TAB working equipment.

However, the undercarriage is a good deal wider than standard to provide the required levels of stability. This was engineered by rotating the H-frame 90 degrees and bolting it to the top of a pair of newly-fabricated lengthening beams, which in turn rest on thetrack frames. These modifications increased the outer track width from 4.8m to 7.4m and the track frames were stretched by 1.7m to a length of just over 8m.

The TAB front end comprises an 8.3m main boom and a 9m auxiliary boom that weigh 22t without their hydraulic cylinders or plumbing.

Two dipper sticks have been supplied at 8m or 12.4m. The shorter stick is fitted with a bucket linkage from a Hitachi ZX870 and is usually fitted with a 4.4-cube bucket, while the longer dipper has a ZX470 linkage and carries a 3cu.m bucket.

The rear of the excavator looks quite a bit longer than normal, thanks to all the extra weight required to balance the front-end equipment. The counterweight frame was lengthened and the standard 17.5-tonne block moved to the rear. This provided the space to slot in two extra wafer weights, increasing the total counterweight to 41.3 tonnes. Additional hydraulic supply lines were added for a hammer, crusher and attachment rotation.

While the excavator was primarily designed to lift heavy blocks, it can hoist an 18t demolition attachment to a pin height of 24m. The 25m-high ex-Ford factory was tackled with a relatively small attachment, a mere 10-tonne VT60 processor.

So, what is the giant excavator – named Grizzly 2.0 – like to operate? “Fantastic,” says operator Andre Geleijnse, who is pleased by the excavator’s rock-steady nature. “It is phenomenally powerful, very productive and slews really quickly. 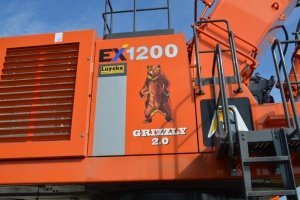 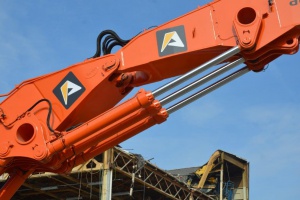 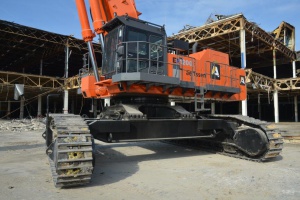 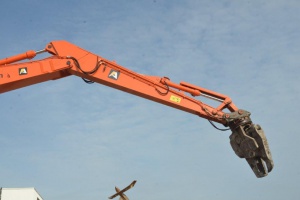 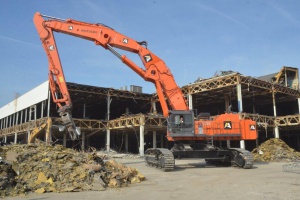 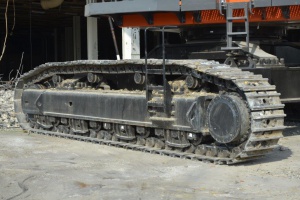